My author page at Goodreads (please do follow me)

The Tell-Tale Con (Rules of the Scam book #1)

Tallulah “Talia” Jones has not had your average upbringing. The child of con-artists, her parents have bestowed such important life lessons upon her as, “the con is in the details” and “don’t steal from your friends … because they can identify you to the cops way too easily.”

Now her dad is in prison, her mom has become “Mystic Madam Magdala”, and her biology partner, pro chess player, son of Hollywood bigwig, Harrison Poe, suddenly needs Talia’s help solving a mystery in a way that only a person who understands the rules of a con can. It looks like a quick and legit way to earn some cash … until someone ups the ante with murder. Now Talia and Harrison are racing against time to find the killer before Harrison becomes the next victim.

It’s going to take all of Talia’s skills to pull off this con … because as any good con artist can tell you, “If you can’t dazzle them with brilliance, baffle them with bull.”

Enjoy a little mystery, a hint of romance, and a lot of laughter with these shorts from some of Gemma Halliday Publishing’s bestselling series.

The only thing that Aloha Lagoon Resort manager Charlotte Conner hates more than her employees working on “island time” is Christmas. It isn’t just the over commercialized tripe, but it’s also the fact that once-upon-a-time her Christmas would-be wedding went up in spectacular flames. Now she has to share the hated Hawaiian holiday with her twin sister (the one responsible for Charlotte’s ruined vows), Alexander Cho (the one currently responsible for destroying Charlotte’s peace of mind and libido), and the body of one very dead assistant. Aloha Lagoon’s police department can’t find anyone else with a better motive for killing Charlotte’s assistant than Charlotte herself, so now it’s up to her, Alex, and her irritatingly ever-present twin to hunt down the real murderer before Charlotte spends her Christmas in a jail cell for a Mele Kalikimurder she didn’t commit. This is one holly-jolly holiday that just might end up deadly!

Information on the other books in this cozy mystery series can be found at alohalagoonmysteries.com

Helen Harding is a genius at picking losers. Her exes run the gamut from merely lazy to legitimately criminal, making all the stops in between. After her fourth, and absolutely final, fiancé is carted off to prison for making time with the underage honeys, Helen is mortified and desperate to get out of town. The perfect solution seems to be a last minute call to arms from her aunt Penny, a beer swigging chain smoker from backwoods Texas who has three-inch press-on nails, a love of men from truck stops, and a life or death problem…that, unfortunately, ends in death before Helen even has a chance to arrive.

Helen believes in atonement—or maybe it’s revenge. Either way, she owes it to Penny to find out who ended her life in violence. Much to the annoyance of the local volunteer sheriff, Aodhagan MacFarley—who Helen is most definitely not getting involved with no matter how hot he may look in his fitted suit and polished wingtips. With or without his help, Helen vows to tracks a trail of suspects who may have more than one foul deed to account for. As the days drag on, the nights heat up, and the danger grows closer, if Helen isn’t careful, she may just end up six feet under and the latest casualty of Birdwell, Texas!

Helen Harding never meant to end up in the small town of Birdwell, Texas. It was just supposed to be a quick detour on the journey to her new life. Helen tells herself that she just wants to sell her newly inherited house so she can donate the money and get out of town without a heap of guilt. And when Crowe Appliances comes to town looking to build a factory, Helen has a prime opportunity to sell them her house as well as see them create jobs for hundreds of down on their luck Birdwellians.

That is until the head of Crowe Appliances ends up dead.

Worse, the body is found in a classic convertible owned by Aodhagan MacFarley—sheriff, answer man, mayor, and Helen’s sometimes partner-in-crime solving. Now the police have their eye on Aodhagen, Helen is once again stuck in town, and a murderer is on the loose. Now it’s up to Helen to find out the truth while trying to keep Aodhagan out of prison… before the killer decides to take Helen out of Birdwell permanently! 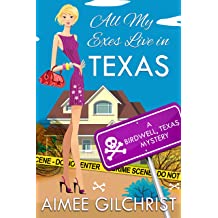